The Roller count had very specific information we needed to report to BLC.  The protocol was to drive no more than 20 kilometers per hour and to stop every two kilometers for 5 minutes.  I scanned with my binoculars while my dad drove and my mom also helped me search.  BLC also wanted us to fill out information about the weather.  We needed to report if the cloud cover was a "one" "two" or "three."  We decided that there was about 30 percent clouds which meant it was a two.  There was a little breeze so that meant it was a "two" for windiness.  There was no rain so it was a zero.

Our first Roller count took place on a 10 kilometer "track" near Everetou Dam.  It was not really even a road.  It was very hilly and windy and in places there were huge rocks that looked like they could pop our tires.  The survey was supposed to take one hour but it took over two hours because we had to drive so slow.  The geography was rolling farm land with many orchards, and was very pretty.  After a long sometimes scary drive, we saw NO Rollers!

Before we started our second Roller Count in Pachna we needed to record the wind and weather.  There were fewer clouds than the first day, so we recorded a one. There was a bit of a breeze, so we recorded a two. Also a two for the “warm” weather.

After recording this information, we were ready to begin our count.  I felt excited and knew we were going to see some awesome birds, but I wasn't sure if we would see any Rollers.  We stopped and scanned for five minutes at our first stop but there was nothing.  We began driving again, and looking closely out of the window.  We were driving as slow as tortoise when my dad began shouting "Roller Roller Roller!"  I saw a streak of blue fly across the country road in front of us.  Then we got out of the car and began walking quickly through an orchard toward a stone wall.  We thought we heard his call nearby but it could have been a Magpie (Pica Pica).  Listening carefully and scanning with our eyes, we waited.  Then we heard him and knew he was in the orchard behind us.  Suddenly, the Roller flew up out of the dense trees that were not neatly organized in rows.  He flew up and disappeared across the road.  We were all very excited because we knew we might see more, and also because it felt good to be able to record that we saw one on our official survey.

It was on our way to the third stop then my mom saw one fly across the road in front of the car and I saw it disappear into a distant tree.  We got out of the car and looked around and in the tree to get a picture, but we never saw it again.  But on our way back to the car we saw another one flying toward us from the other direction.  The rules of the Roller count say that if the recorder is unsure if it is the same Roller that has already been recorded, to not count it.  So we knew for sure this one was a different Roller because it came from the opposite direction.

It felt good to help BLC conduct a meaningful survey so they could have more information about where the Rollers live in Cyprus, and where they don't.  I hope to get another opportunity to participate in another Roller count, or another scientific project in Cyprus soon.


Posted by sammy the hoopoe at 3:43 AM No comments:

We travelled in the car for about 20 kilometers from the spot where my dad and I got in the car with Victor.  We slowed down and were looking out of the window when Victor spotted a European Roller on a low shrub like bush about eye level with where we were.  My camera was already out and I started taking pictures, and suddenly a Roller who was lower on the bush flew up and that's when I snapped this picture.


We arrived at a clearing where we got out of the car.  This is where Victor stays for five hours to monitor the Griffon Vultures on behalf of BLC.  We looked around for about 30 minutes over the valley and over the "feeding station."  This is used by BLC to help monitor the vulture's behavior.  When there is an injured vulture they capture it and keep it there until it is able to go back to the wild.

This was also the location for the pictures below.  I raised 200 dollars for BLC by using the USB port on my keyboard and recording Christmas songs.  I asked my family back in America to purchase them for 10 dollars, but most people gave me 20.  Bird Life Cyprus uses this money to help monitor bird populations and to help protect nature.  For example, Victor was hired by the Ministry of the Environment in Cyprus to conduct a survey of birds in an area where developers wanted to build a golf course.  Because of the work Victor did with counting the birds in the area, he helped convince the government not to allow the golf course to be built.  He said it was stupid to build a golf course there because there were so many birds and it was such a green natural space.

On the way back we saw the rare Turtle Dove and the Red Rumped Swallow.  We stopped at a dam on the way back and had some home made banana bread with chocolate chips that was made by Victor's girlfriend.  It was a great trip.

Stay tuned for my next post about my first and second days of the Roller Count!

Posted by sammy the hoopoe at 9:44 PM No comments:

This is the first of my blog posts from Cyprus.  We arrived yesterday, and today we woke up, had breakfast and drove to Akrotiri

When we arrived, our guide for the day, Victor Tjernberg from Birdlife Cyprus, was already there with his scope set up.  As soon as I looked through the scope I knew in a second it was a European Roller! I knew then that our day was off to a good start.  My dad and sister left to go to the beach and my mom and I stayed for our five hour birding tour!

We walked out onto a dry marsh trail lined with low lying shrubs on one side, with tall reeds on the other.  We spotted several Hooded Crows, but then we heard the elusive Black Francolin that Victor said was common to hear but as soon as you look, it is gone.  But no more than ten minutes later, who do you think we saw fly out of the sky and land right in front of us? It was a male and female Black Francolin! As soon as we got the camera focused, they were gone! 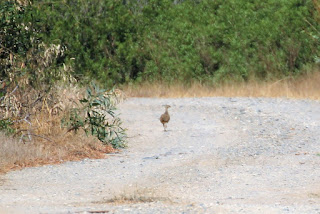 Our next stop was a pond that the farmers used for irrigation, and the pond was surrounded by farmland.  Next to the pond was tall tree, that half way up on one of the branches was a Little Egret Nest.  We saw the female sitting on the nest with the male perched next to her.  In the pond below was a family of ten Little Grebes. 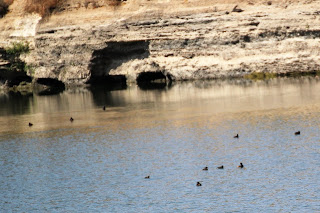 We drove for a little while longer and walked for about 100 meters on a dirt road with lots of salt crystals.  We came to a clearing and saw a flamingo wading in the salty shallows and he was using his feet to stir up cray fish at the bottom.  He looked like he was dancing, he never stopped shuffling his feet, even when he caught one and ate it. 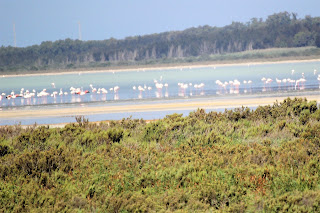 We drove for about ten minutes and finally got to a cliff edge, and looked down with the ocean far below us with pools surrounded by rocks.  The pools were remains of an old quarry. There were about five pools, and Victor said he could see outlines of turtles on the fifth pool.  In the distance was the British Military Base with power poles and when I looked through the binoculars I saw two circling Griffon Vultures. 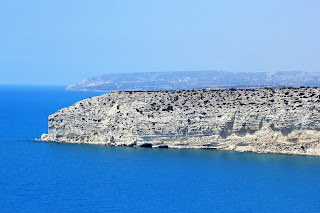 This was our first birding trip in Cyprus, and we have thee more ahead of us.  My next post will describe our experience with our first European Roller count for Birdlife Cyprus.

Posted by sammy the hoopoe at 4:58 AM No comments: