January 2nd - Seven Island Bird Sanctuary The drive to Seven Island Bird Sanctuary was about 45 minutes, and on the way, we saw a falcon of some kind, possibly a Peregrine Falcon or a Merlin. As we were driving down the road in the park to the parking lot, my mom said that a good place to see birds was down by the boat launch, and that not many other birders use it. As we pulled up to the boat launch, the first thing we heard were two Carolina Wrens calling each other. As we got out of the car, I saw one of the Carolina Wrens and a Northern Mockingbird. As we started down the trail, we heard and saw hundreds of birds flying across the trail. We saw two Pileated Woodpecker houses on two trees. Then, we heard a Pileated Woodpecker calling and then we saw it climbing up a tree! I am always excited to see Pileated Woodpeckers, but in 2020 was amazing! The only other time I can remember when we saw a Pileated Woodpecker was in Florida. I couldn’t get a picture because he was too hidden in the branches. We saw three or four Eastern Towhees hopping in the branches. The trail was filthy with Cardinals and Robins. We spotted two groups of five or six deer hopping around to go down to the river to get a drink. We heard what we thought was a Carolina Chickadee, but when we got to another trail, we realized it was a White Throated Sparrow. We also spotted some American Goldfinches. After we finished the boat launch trail, we headed back to the car and had a snack. As we were eating, we saw a Northern Mockingbird on a fence post near us, eyeing our kettle corn. He must have been fed by other people having a snack. After we finished, we walked down a road but there were people everywhere. We eventually found a small trail that nobody was walking on. We walked up a long hill, and at the top we found a bush with a northern mockingbird in it, posing for us. The scenery was small bushes, and as we were walking we saw five or six White Tailed Deer hopping through the bushes. At the top, my sister and I ran down a long hill, and at the bottom there was a small pond. On the pond was a small boardwalk and viewing platform. The platform was made out of around 170,000 recycled plastic jugs. We saw one female and two male Northern Cardinals in a bush. As soon as they were startled, a Marsh Wren flew in and took their spot. We also saw three White Throated Sparrows hopping around.

January 3-6 Ellijay Georgia Property We arrived the evening of the third at our next airbnb in the mountains of North Georgia. The first thing we noticed was all of the land that was part of the property. The house was huge. After we explored the house, we went on a walk around the property. The next morning, after my mom got the groceries, we went walking again and this time, there were cattle out on the farm across the stream! My sister and I found some grass for them, but they weren’t interested in us. When we came back, I noticed that there were at least ten Eastern Bluebirds in the bushes! We had basically won the “Bluebird Lottery.” I also spotted some Northern Cardinals and an Eastern Phoebe on the hot tub cover! We also saw twelve Turkey Vultures circling above our house. We constantly heard Carolina Wrens in our yard, and also heard a White Throated Sparrow responding to my calls.

Posted by sammy the hoopoe at 4:59 PM No comments:

Bombay Hook is only 10-15 minutes away from the house we are staying in, so we were happy about that. As we pulled into the parking lot, the first thing we noticed was we had to pay a fee, but we didn’t know that we had to put the money in an envelope. We had put twenty dollars straight into the box, and then we realized that we had to put it into an envelope provided first, so we put another twenty dollars in. After we left the parking lot, we drove down a gravel road, and after a thousand or so feet, we drove around a corner and passed a small man-made “pool” called Raymond Pool, and then we drove past another man-made “pool” called Shearness Pool. We saw literally thousands of Snow Geese, and every time we looked up we saw lots of V’s, with hundreds of Snow Geese in each V. This morning, before we went birding, we went jogging down to Shearness Pool and back. It was 27o, and it actually felt good on my burning cheeks. Later tonight, as we were driving to Fowler Beach to see owls, we saw lots of what looked like snow, but then we realized that it was thousands of Snow Geese on the grass, hunkering down for the night. Every time we looked up, there were lots of V’s. We saw 3 or 4 Northern Harriers flying around, we might have seen one owl flying, but we aren’t sure. Besides the thousands of Snow Geese, we were also able to add several new species to our E-bird life list, including the Carolina Chickadee, Golden Crowned Kinglet, Snow Goose, Green Winged Teal, Northern Mockingbird, Northern Harrier, Turkey Vulture and more. 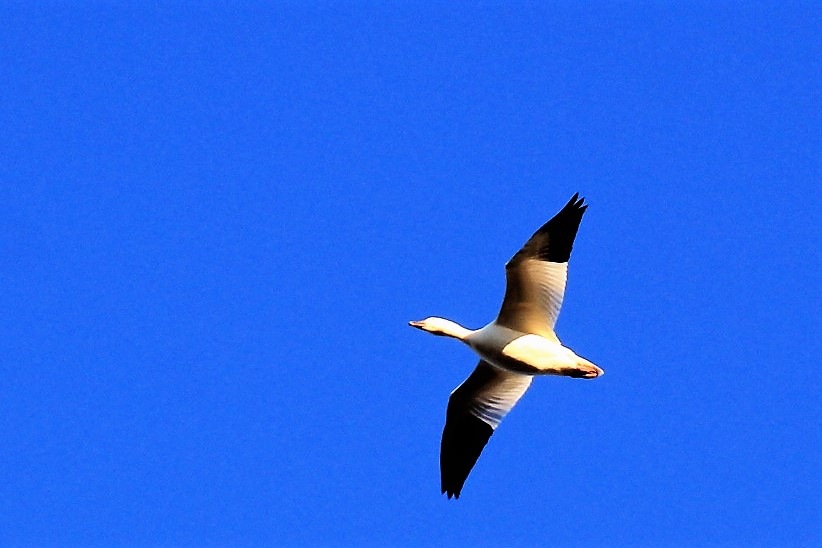 This Snow Goose was trying to catch up with the rest of the flock.
Posted by sammy the hoopoe at 2:06 PM No comments: