When we got back to our house, I immediately checked the bird feeders. One of the feeders is hanging from a thick tree branch by the side of our house. The feeder was on the ground. It had dirt all over it. The rope looked like it had been either ripped by the tornado in Yarmouth or chewed by a squirrel or chipmunk. The second feeder which is a tray feeder was just empty. There was no damage. The next morning, my mom, dad, sister and grandpa went to eat breakfast at this small cafe about 5 minutes away. After that we went to the hardware store and bought a new bird feeder, seeds, screws, pulleys and ropes.  After lunch my grandpa and I went into our garage. We took out the rope and pulleys we had just bought and looped the rope through the bottom pulley with one wheel and the top pulley with two wheels. Then we drilled holes into the roof of the bird feeder and threaded weed wacker twine through it and then drilled the screws in. Then we used a lighter to burn the rope together after it was looped through the pulleys.

After we hung up the birdfeeder, it didn’t take long for the birds to find the seeds. One day I was playing in the playroom by the birdfeeder when I heard a strange noise like  whiiiip, whiiiip, whiiiip! I looked out the window and saw… two flickers that were bobbing up and down next to the birdbath that looked like they were mating and making the noise. A few minutes later a Blue Jay flew in screeching and flying fast. He spread out his wings to slow himself down. But when he landed, he lost his balance and dangled upside down with only his claws holding onto the feeder. He was a juvenile. He pumped his wings to get a firm hold on the feeder again.  The pictures on the photo gallery section shows just some of the great backyard birding from this summer on Cape Cod. 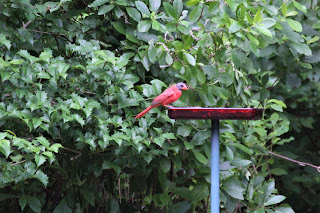 In mid-July we left Cape Cod for ten days and went to Florida to see my cousins and grandma.  On the photo gallery of the Cape Cod and Florida section of birdsandturtles you will see some of the pictures I took from our three main birding destinations.

Our first day in Florida, we went to the venice jetty with my uncle and one of my grandpas. Near the end of the jetty, There was a snowy egret walking around and searching for some dead bait fish that were dropped but not squished. As we were walking back to our car, we saw a man cast his fishing line and instead of catching a fish he accidently caught a pelican. He felt terrible about catching the pelican and reeled the pelican in close enough so he could cut the line and he did. “Oh, it will just fall off,” he said.

A few days later, before I had summer swim camp with two of my cousins, I went to the venice rookery with my family.  It is a pond with some trees and a nice habitat for birds and fish. There were older people bird watching. We saw a few dead fish, a family of Whistling Ducks, A black Crowned Night Heron, an elusive Blue Jay, and two or three Anhingas. The Black Crowned Night Heron was perched on a log overlooking the shore of the pond. Luckily we didn’t see any alligators. 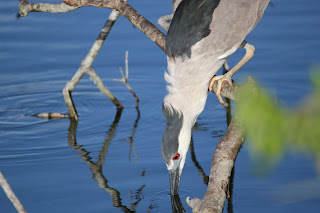 Our third to last day in Florida, my family plus my cousin Danny, who is 9, drove about 45 minutes away to Lido Key to see the rare Black Skimmers. There is a colony of Skimmers that nest all along the beach. Also while we were at the beach, I captured some great pictures not only of the Skimmers but of Brown Pelicans also. The skimmers are called Skimmers because they skim the water with their lower mandible because it is longer so they fly low and skim the water and catch their tasty little fish and crustaceans.

Posted by sammy the hoopoe at 6:56 AM No comments: