Our guide, Hassan, started with a discussion where we learned there are three species of falcons at the hospital. They are Gyrfalcon, (Falco rusticolus,) the Peregrine Falcon,( Falco peregrinus,) and the  Saker Falcon,(Falco cherrug).

In the second room, all the falcons had hoods on because if they did not, they would attack each other and injure and maybe try to or fight each other.

The next thing we did was split up into two groups and the other group went to a different table and my group watched the veterinarian/doctor anesthetize the falcon to clip its' talons. He anesthetized the falcon by putting the falcons' head into a large plastic tube the right size for it is head. Then, after he clipped it is talons, he showed us all of the falcons' feathers, its' ear, its'mouth and a radio transmitter in case falcon escapes.  After he took the falcons' head out of the tube, it started to wake up after about 10-15 minutes. 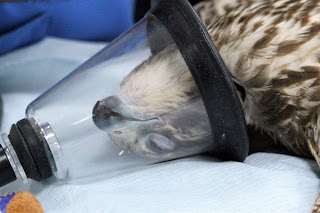 Another thing we did in that room, was were some of the other people and I got to hold a falcon and my sister got to too. The falcon weighed about 1 kg. We were Wearing gloves just for handling birds of prey. The falcon wasn't interested in looking at the camera  but it did for about 1/2 a second. When my sister was holding the falcon with help from my mom, The falcon suddenly tried to fly away.
For more information about my falcon hospital adventure, visit my bird travels section.


Another adventure I had in Abu-Dhabi, was in Eastern Mangroves National Park.

During our trip to the incredible Eastern Mangroves Abu Dhabi, we went on two different boat rides. One was at 7:30 am. And the other one was at 4:30 pm. on two different days.Some of the birds we saw on our first trip at 7:30 am. was a Common Kingfisher, one Gray Heron, and three Red Wattled Lapwings. On our second trip we saw two Purple Sunbirds, three Striated Herons and A pair of Egyptian Geese. The boat was a 75 horsepower outboard pontoon boat and it was quiet boat just right for watching birds.


Posted by sammy the hoopoe at 2:19 AM No comments: